The whole wheel came off 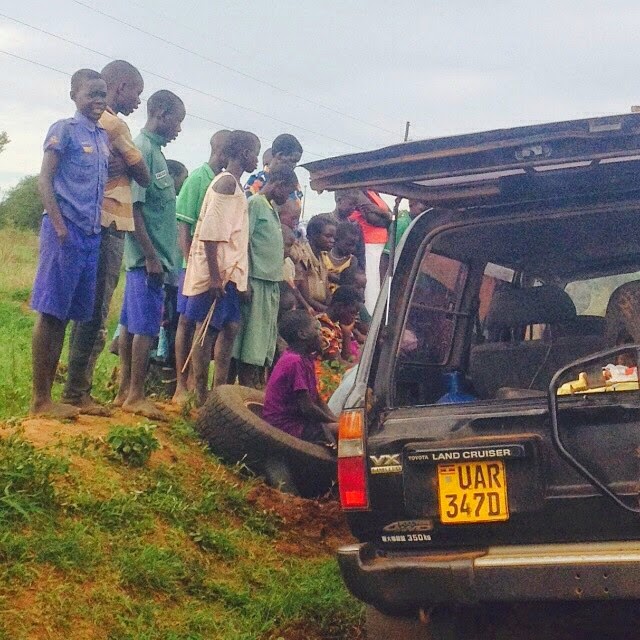 I didn't make it back up to Karamoja for my second trip of the month for a variety of reasons one of which was that about half way up on my first attempt the wheel came off the truck at about 60km per hour. Not a pleasant experience! A HUGE thanks to Ronnie and Collin (their blog here) who are fellow missionaries in Soroti who drove for two hours to help me jack the vehicle up high enough to get the wheel back on.
Other stuff came up so I haven't made it back up. I'm bummed because we were going to tie the grass on my new house and I've gotten word that the ladies did it without me.

Posted by Jennifer at 5:42 PM No comments:

Getting water,emergencyand a large spider 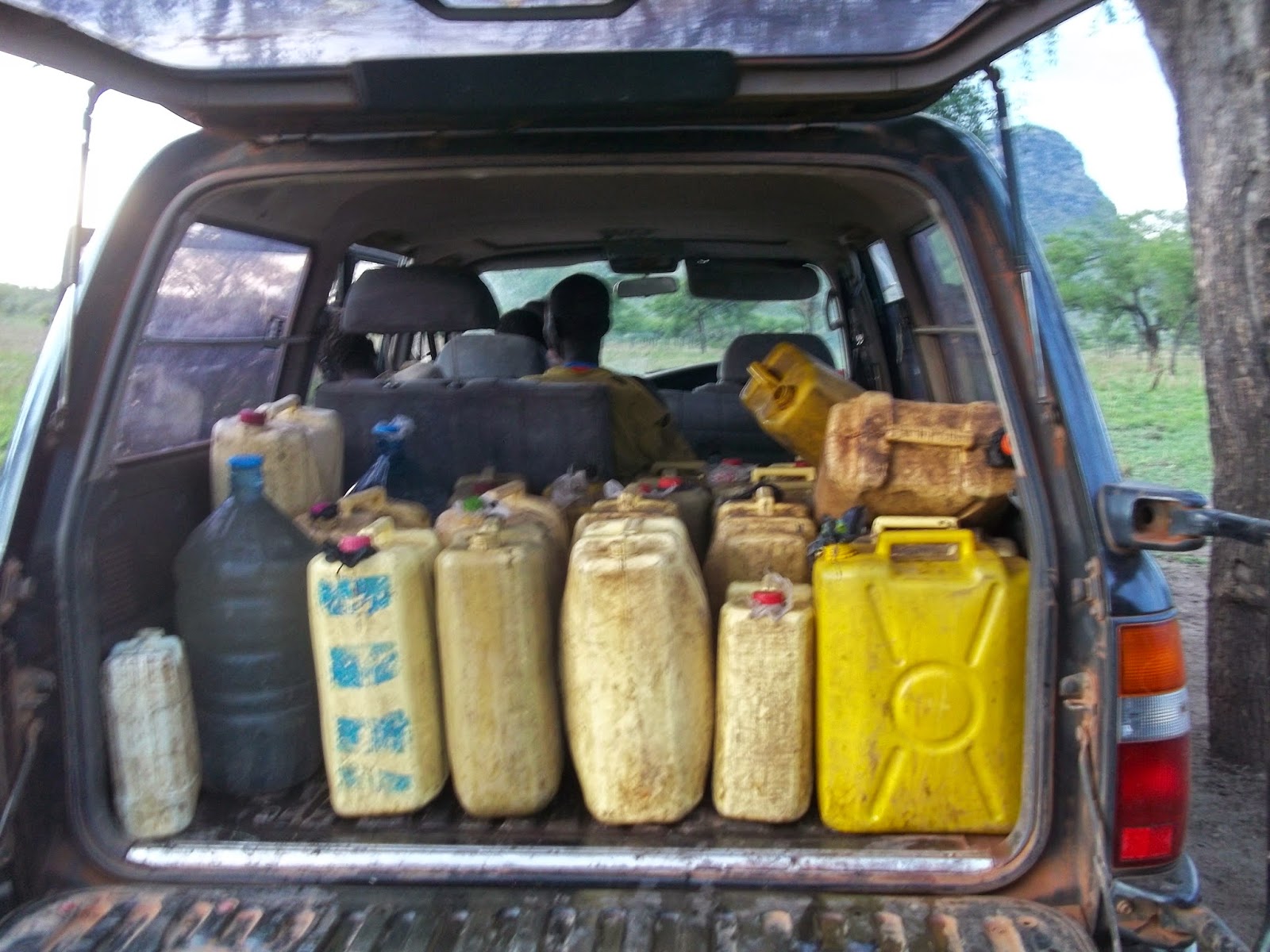 Really the only thing that these things have in common is that they happened while I was in Karamoja and I have pictures of it so this is really just a post with some of the week's pictures.

There is a new bore hole about 10km from the village in a neighboring village so I offered to carry water for the ladies who helped me all day. Borehole water is so much cleaner and safer than the spring water that they drink now. I can fit 22 cans in my truck (the two on top are empty), and at roughly 20 kg per can this is 440kg or 980 pounds. Add in me and the girls who help me pump the water is is any wonder I need new shocks? 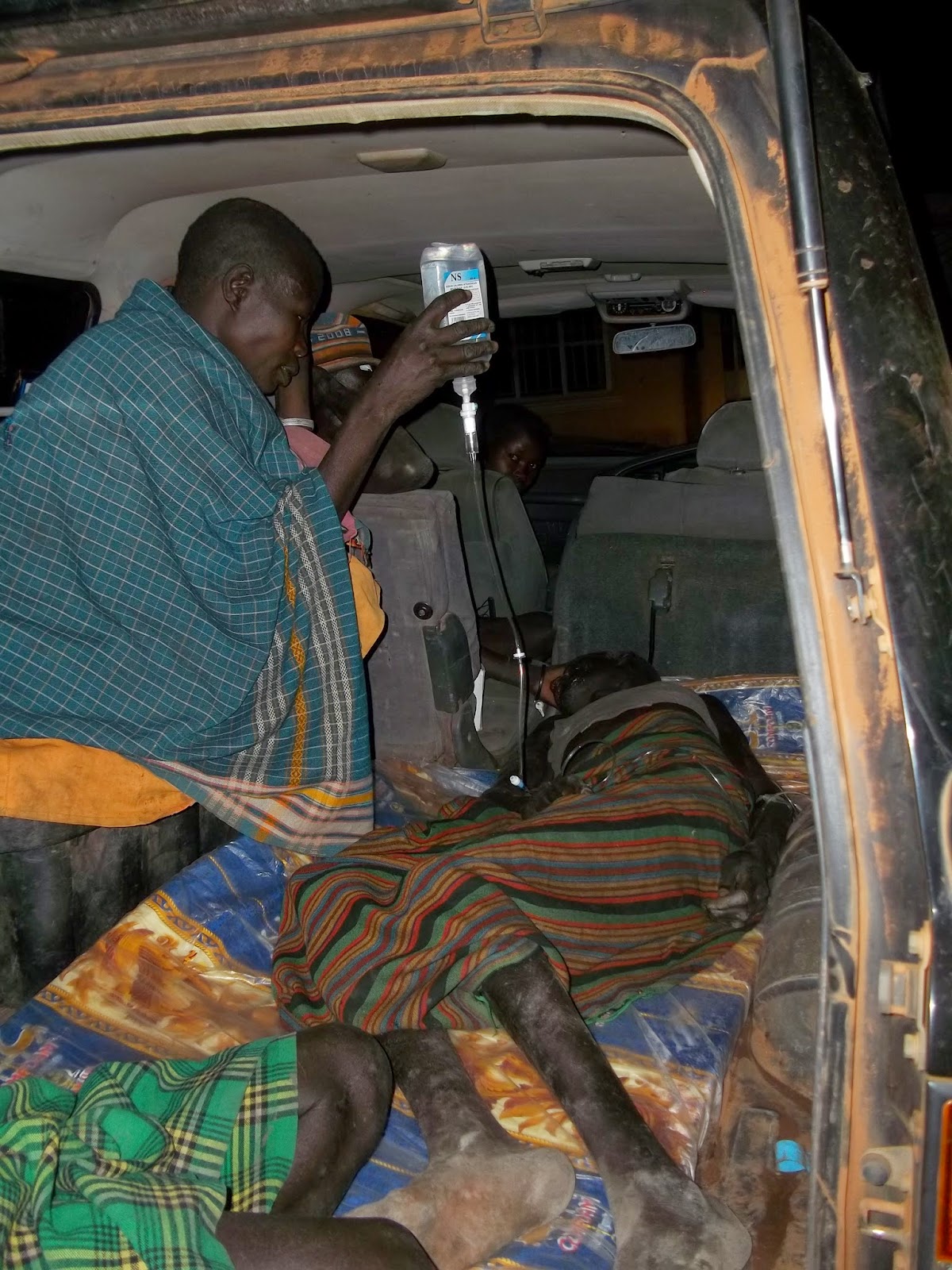 I had another late night emergency run. Pouring rain, muddy, very dark and I was very afraid the patient was going to die before we reached the hospital but he was much better yesterday!! 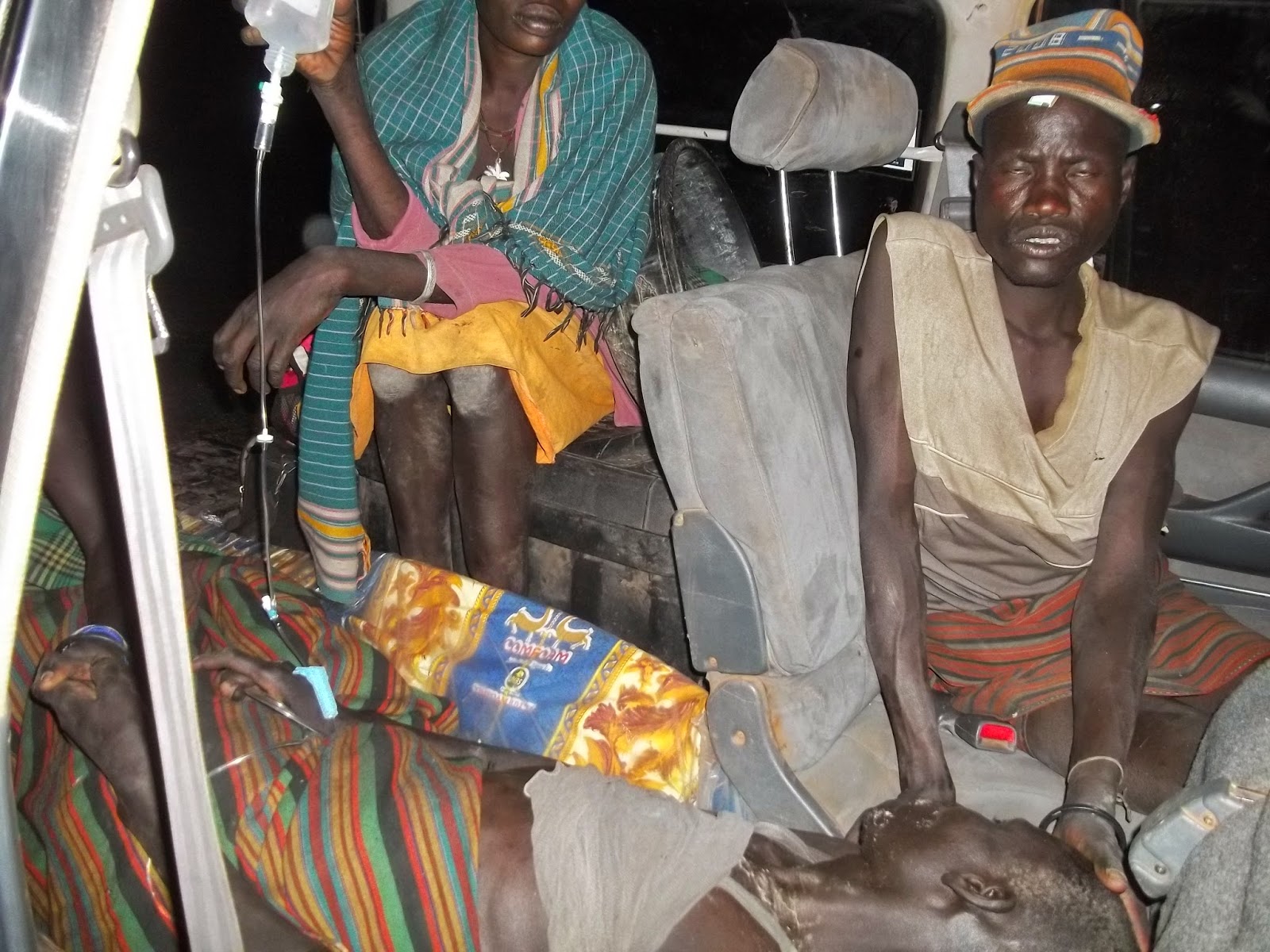 His wife is holding the IV, his son is trying to keep his airway clear. At this point we were waiting for the stretcher to carry him into the clinic.
And last but not least, there is a spider that is living on my toilet paper.... up to this point I have tried to let this type of spider live because they eat so many insects and it doesn't spin a web. However, this one may have to go if it doesn't relocate shortly.
Posted by Jennifer at 8:32 AM No comments:

Power surge and a lack of energy and an interesting campfire.

Just got back from Karamoja... and unfortunately carried with me Karamoja's version of Montezuma's revenge. Which, like most of the negative things about Karamoja, is nastier and slightly more deadly than in other places of the world. I did managed to drive myself back but it took several more hours than it should have because I had to keep pulling over, then after vomiting, would lay down in the back until I could manage to drive again for a few minutes before vomiting again. But enough about that. I'm feeling mostly better but seem to have no energy and kind of ache all over.  My other excuse for not posting enough is that about a week ago some parts of Soroti town were effected with a major power surge.  Though saying it that way makes it sound like a brief thing. For more than 6 hours, 300+ volts of power ran through the lines. That pretty much fried anything that was plugged or wired in. I woke to the smell of smoke and burning plastic and flipped on the light next to the bed only to have it explode bits of glass everywhere. I made the mistake of stumbling into the next room and also trying that light and blowing it up also before figuring out what was going on. I lost several (expensive!) power strips, two fans, even my brand new ceiling fan seems to have bit the dust. The worst fatality is by far and away my computer cord. Thankfully, the computer is fine and I have a teammate with the same type of computer so I can go over to their place to charge. But I can tell that my computer time is about to be greatly restricted. 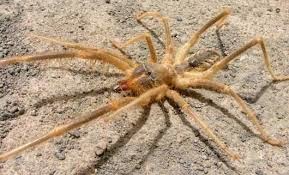 And a camp fire- I just learned that we have camel spiders in Karamoja. If you have a weak stomach DO NOT google this animal. However, if you are into rather large arachnid predators that have a nasty bite and spit that can liquefy their victim's flesh then by all means google it.  I was with a group of friends on Saturday night and we killed one as we sat around a camp fire. This is not something you want sneaking up on you in the dark by the way. 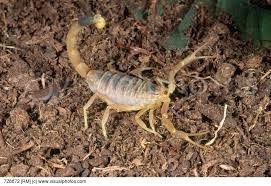 We also killed a scorpion that night. Makes camp fires a bit less fun when you have to be worried about these guys. By the way, neither of these are my pictures. I'm much more concerned with finding something to kill them or at least keeping my feet out of the way of others attempting to kill them than finding my camera and getting a good shot.

Struggles of being a single female in missions

This fellow missionary nailed it. Accurate and funny. Check out her blog: 20 Struggles of being a single female missionary.
Posted by Jennifer at 9:57 AM No comments: 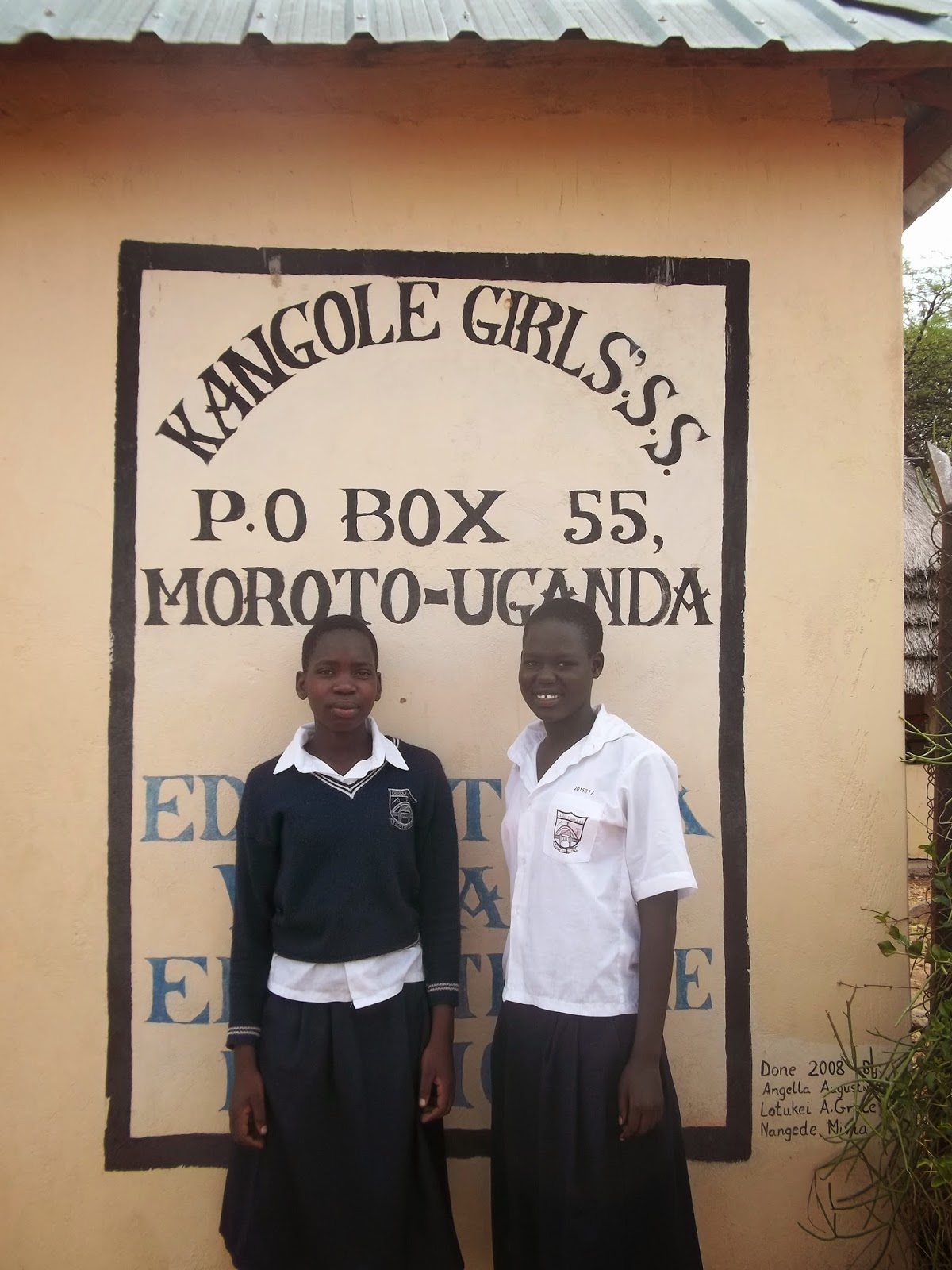 I write about Betty and Vicky occasionally. They are now secondary school students!! They passed their PLEs with scores of 21 and 20 respectively which, isn't great but is pretty dang good. They were accepted into boarding school in Kangole. Thanks for those who were praying for them (and me!)

Posted by Jennifer at 6:00 AM No comments:

Maria (Warning! Some may think this post is disgusting!) 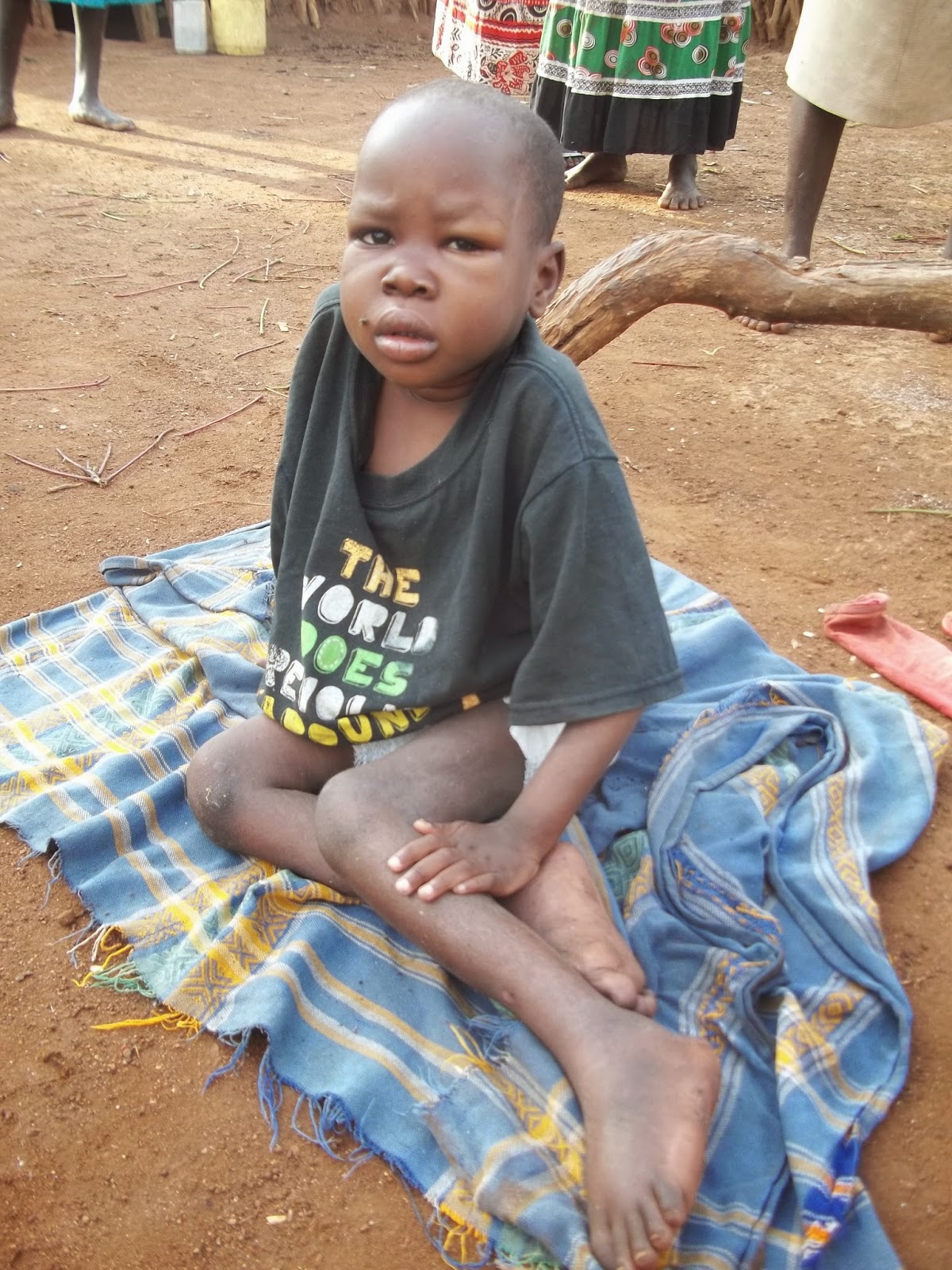 Well, little girls who have lots of medical needs seems to be my MO lately. When I was out in the village on Tuesday one of the birth attendants brought me to their home where they had taken in a little girl named Maria. She is a total orphan. Her mother died of what I suspect was TB a year ago. She had been staying with someone but that person didn't want her anymore and sent her out to Nakayot. This little girl has significant Kwashiorkor (as evidenced by her moon face) in addition to paraplegia from spinal TB and pressure sores from the paraplegia. She also has pneumonia probably from a combination of the malnutrition and lack of mobility.
She was burning up, quite dehydrated and very short of breath. And this is what two of her many her wounds looked like. 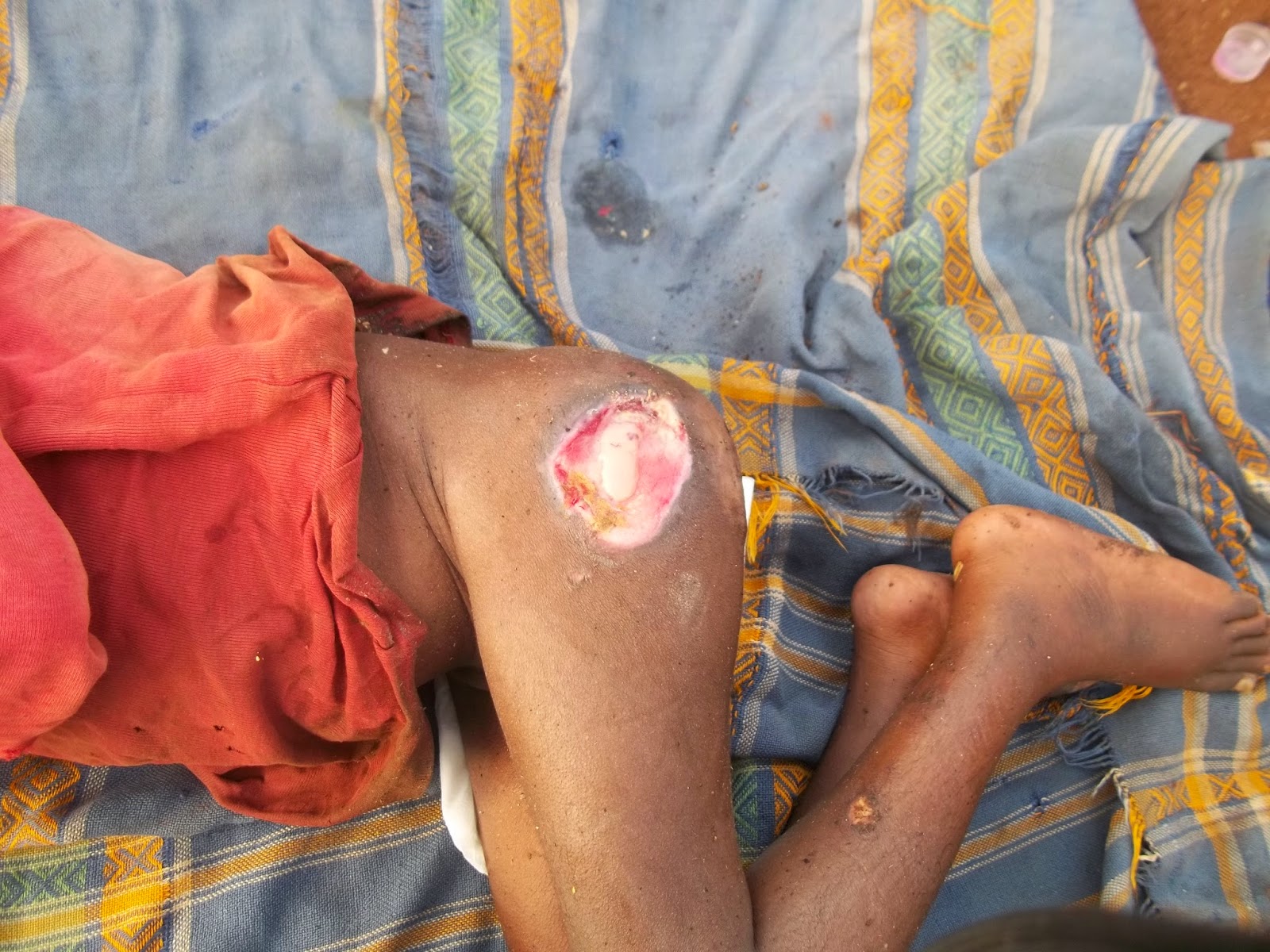 Where to even begin?! And clearly this case isn't one the VHTs can manage out in the village. So I started some fluids and abx and transferred her to the hospital. It is several hours from the village so I'm worried this will be an opportunity to just abandon her completely but there was no other option.

Posted by Jennifer at 6:00 AM No comments:

Well, I've just gotten back from Lormoruchbae. I'd heard word last week that UWA (Uganda Wildlife Association) had been to the new village they were building and tried to force them off the land.  Anyone who has read this blog for a while knows that there has been an ongoing battle (example here) and clearly it is not over yet. We thought we had reached some resolution and the president had made some pronouncements and our people are not living in the national park. But they came and held village leaders (and my friend Mary!) at gun point while they tore apart months of hard work.

I know these don't actually look like much but all these sticks are tied when they are green and soft so now that they are dried it will be much harder (and weaker) to tie back together. And if they move, it will all have to be carried, by hand and on their heads, to another site. And rainy season is here so now it is too late to build again. They will have to wait until the next dry season. And all of these sticks and grass will have to be kept from rotting and being eaten by termites.
They had begun opening the ground for their fields (hours of hoeing by hand) and they have been told if they use those fields they will come back and torch the plants. So they are quickly trying to open land in other places but now is the time for seeds already so germination will be late. If the dry season comes too early it could mean another year of poor harvest. It makes me want to weep just considering it. 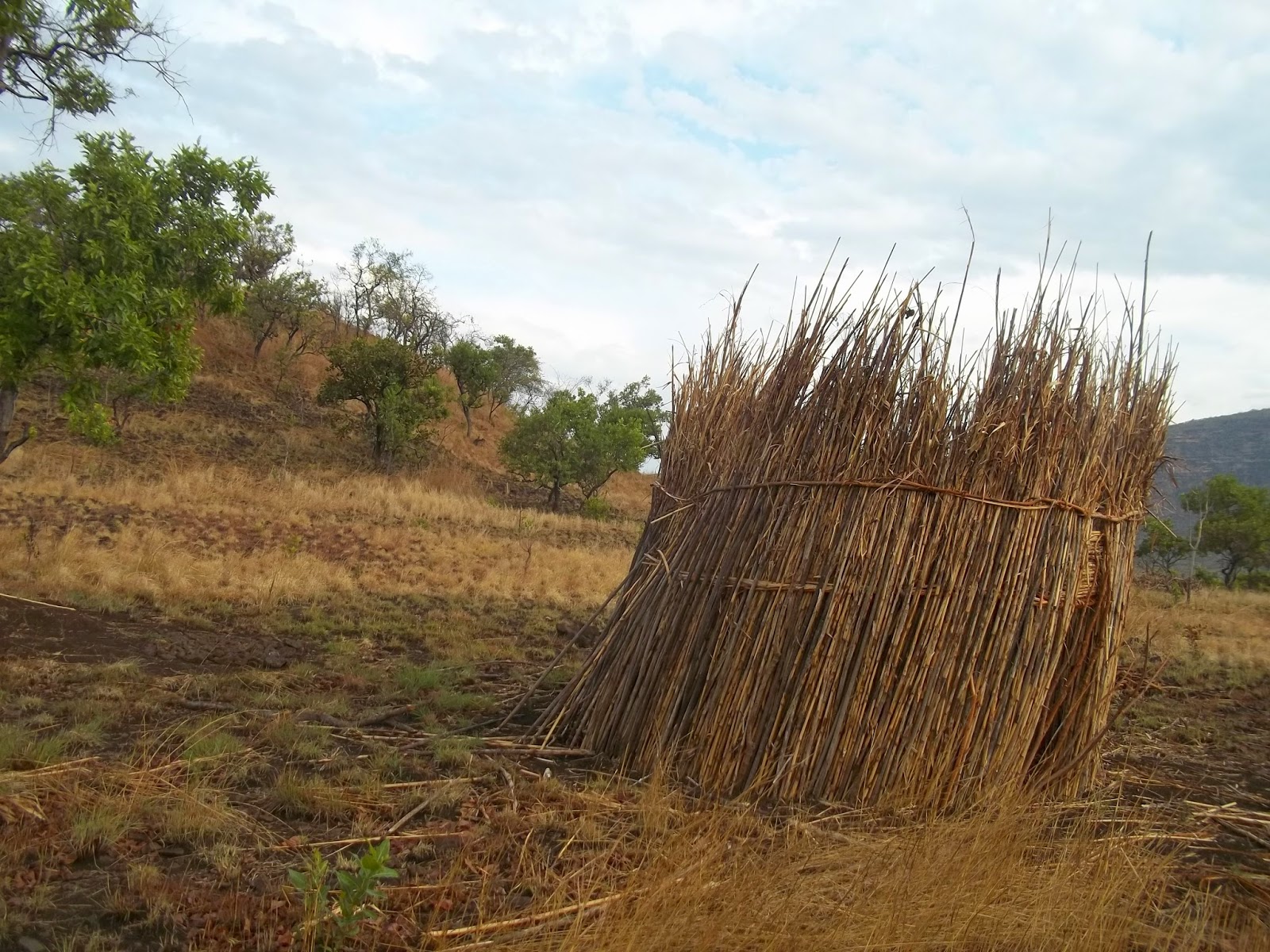 My temporary house was pushed over. (The ladies put it back up for me.) Worse, I had begun to use metal poles in place of sticks on my "permanent" house and UWA took them all. Also they took down the fence I had put around some fruit trees and pineapple bushes and took it with them. Truthfully, my purpose in building a house was mostly to build relationships and work together with the ladies. So for me starting over just means more time to work with them. But my heart goes out to these guys. They work so hard. They have so few resources. Why would UWA do this?!

Jennifer
I'm running this race of life in Uganda, East Africa. I'm a nurse suffering from role crisis as most of my work is that of a physician. I am under qualified and ill equipped. However, my God is not. And He has me here for a reason. My job is to get up in the morning and submit to Him. It makes every day an adventure.

However, I consider my life worth nothing to me; if only I may finish the race and complete the task the Lord Jesus has given me- the task of testifying to the gospel of God's grace.

I've lived in Uganda for more than seven years now! Sometimes it amazes me and most of the time I wonder what the heck I'm doing.